Edit, July 20, 2021: I’ve written an updated version of this post, which includes a translation of a miko blog I hadn’t read when I initially posted this translation. The translation itself is almost entirely the same; the change I did make I had already written as a possible interpretation in the footnotes here. I’m leaving this original post up for transparency and the sake of chronicling my own work, but please check out the updated version, here. [End of note, original post follows.]

I interrupt the regularly scheduled programming to make it known that currently I am absolutely dying because of the words “free shipping” beneath the price tag on these headphones:

Who the hell worries about shipping when buying headphones that cost as much as a BMW? Like is that really gonna be the deal-breaker here? 😂

Anyway, I don’t think it’s necessary to do a full translation of miko’s blog post about this song, so I’ll just summarize the two main things she talked about.

First, “I feel you” was used as the opening song on a DVD that was part of the Plenus Nadeshiko League & Challenge League guidebook for 2012. (These are soccer leagues; Nadeshiko Japan is Japan’s national women’s soccer team.) Interestingly, this tie-in came about because someone working on the guidebook was at an exist†trace show, heard the song, thought it would go well with the footage of the players, and asked for permission to use it. miko goes on to say that she hopes the tie-in will get soccer fans interested in exist†trace, and exist†trace fans interested in soccer, because everything from music to sports, from fashion, art, and politics to education, everything and everyone has to come together because humans can’t live alone.

Second, she says that what exist†trace most wants to “feel” right now (right then) is everyone’s voices. She encourages fans to leave their thoughts on the album in the comments once it releases, saying that all the comments they got for THE LAST DAYBREAK gave them the strength to keep working on the tracks for this album. She ends the post by saying “Let’s make exist†trace together!”

Now then, on to the song. I’m honestly not terribly confident in this translation. It’s definitely a case of understanding the words but not necessarily how they fit together; that is to say, I can’t really see the picture this song is painting. I see it primarily as being about separation and wanting to get back to that person, but…the details elude me. Then again, maybe I actually do understand it?

Eh, for what it’s worth, here it is, with loooots of footnotes. I recommend reading through the translation first. (^o^;)

Lyrics in Japanese can be found here on J-Lyric.

At the beginning of the clear season1
A torn sound traces my ears
My heart stirs, your shoulders trembled
A voice calling my name2

Unable to grasp the shredded thread,3
I cried in my childishness as it slipped away

(I feel you)
I’ll ride the cold wind to find you,
(I feel you)
connecting the red that spans the sky, heading for your town

The measured distance piles up in empty space
Alone, I think fondly of that town
My heart stirs, searching within the crowd
For a voice that calls my name4

With the words still hanging in midair
Shaking violently, I rejected reality5

(I feel you)
Even if now your voice is raised in song with someone else,
(I feel you)
if you’ll call the name quickly scribbled in your memory…

(I feel you)
You rode the cold wind on a whim,
(I feel you)
and became a blue rainbow spanning the sky
So I feel you
Hey, it’s okay if you’ve forgotten even my name6
Let’s meet here once again; don’t say anything7

1. I’m really confused by this use of 研ぎすます (togisumasu). In reference to blades or cutting tools, it means to sharpen or to polish. It can also be used idiomatically to refer to “sharpening” one’s mind, senses, intellect, etc. So, in reference to the seasons…what does it mean? I went with “clear” because the Japanese definition of the first meaning says “to polish until there is no cloudiness,” indeed, “togisumasu” itself is a compound that can also be written 研ぎ澄ます, the second kanji meaning “clear.” But then, what is the “clear” season? Spring? Or perhaps late summer, once the rainy season ends? ⤴

2. The subject is largely omitted throughout this song and I can’t quite grasp what it’s supposed to be. This verse could just as easily be “A torn sound that traces the/your ears, your/our heart(s) stir, your shoulders trembled, a voice/voices calling out names/my name/your name.” The only subject that’s specified is that it is “you” whose shoulders trembled, and in the next line, it is “I” who cried while unable to grasp the shredded thread. So, I’ve chosen to go on the assumption that the “shredded thread” and “torn sound” refers to “you” calling out [my] name, but “I” was unable to reconnect with “you” in that moment, hence the rest of the song. ⤴

3. I assume this is a reference to the “red thread of fate,” which usually does not tear. ⤴

4. Three things in this verse. First, “The measured distance piles up in the empty space”: I’m seeing this as an airplane reference, but…

Second, I translated 想う (omou) as “think fondly” because that’s kinda the difference between 想う and 思う (also “omou” meaning “to think”). The former is more emotional, and is usually used in these types of contexts (as opposed to, say, thinking about algebra).

5. 宙 (chuu) most often refers to space or the atmosphere, but it can also refer to memory. For example, in English there’s the idiom to recite something “by heart,” but in Japanese you would be reciting “by space” to mean “from memory.” So the first line here might be “With the words still hanging in my memory,” especially since memory is brought up a few lines later. But I chose to go with “midair” here because of all the other space/air/sky imagery in this song. I’m willing to bet that we’re meant to understand it both ways.

In the second line here, again because the subject is omitted, I’m not sure if it really was “I” who rejected reality. Perhaps it was “the words” which were a rejection of reality. ⤴

6. すら (sura) is one of those words that makes you laugh when you compare its entry in the Japanese-English dictionary with its entry in the Japanese dictionary. The former says “even” then redirects you to さえ (sae). The latter throws an obscene wall of text at you, almost as obscene as looking up the word “the” in an English dictionary. For the purposes of those who just want to know what this song says, suffice to say that “sura” implies that whatever it was that “even” happened was to some extent expected, so the character in the song knew that being forgotten was a possibility. For those who want to go a little deeper into the difference between すら and さえ、I recommend this Japanese article that has a one-panel comic that I think explains the difference very clearly. ⤴

One thought on “exist†trace – I feel you” 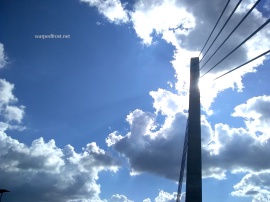