For this song, there are several places where the lyrics as presented on Rock Lyric differ from what’s actually sung. However, due to the nature of the differences, I don’t believe these to be typos (save for maybe the extra “wa” in the first line); these are probably cases of the the sung & written lyrics differing on purpose. The Japanese lyrics I wrote below use what’s actually sung, and the translation is of these lyrics. However, I have made note of the differences in the translation notes at the end.

From here you can jump to the romaji, English translation, or excerpt from miko’s blog about this song.

If you wanna catch me, you’re gonna have to tame me first1

If the sun has set…

A sea of jewels, a momentary paradise
When morning comes, it turns to foam and disappears
Make it shine more, pour your all into it
Imagine it,
The rainbow-colored imagination that’s yours alone

An empty future, connected dreams
Cover yourself in sequins to be guided by

If you’ve made up your mind…

Eye contact on a floor dancing with lust2
I can feel your implicit sign
Chase me with wild abandon, burn me into your eyes3
Toy with me and only me
Seduction-colored imagination4

A sea of jewels, a momentary paradise
When morning comes, it turns to foam and disappears
Make it shine more, pour your all into it
Show me tomorrow!

So let’s continue the dream tonight
Shall we begin?
The rainbow-colored imagination that’s ours alone

This song has a secret that I can’t reveal just yet…so I won’t touch on that here!

People who have given this song a listen probably went, “…Huh?” Overall, the guitar phrases are low-key, the riffs make you giggle, and there are weird sound effects popping up all over the place! This song is on the other, other side of songs like “Ginger,” “Kuchibiru,” and “Spiral Daisakusen.” This song came into being all of a sudden when I was at home and happened to strum the “fufuuun” that became the intro riff on my guitar. I think we can say this song lacks tension in a good way.

Oh yeah, that’s right! There was one spot in my vocals where Jyo made the request, “Do it like a little devil tempting someone!” Even though I was thinking “What?!” I made everything inside my mind pink and tried to sing it. Please give listening to this kind of song a try, too. LOL

1. 餌付け (ezuke) literally means “feeding an animal” or “feeding a wild animal so that it gets used to receiving food from humans.” Which makes for interesting imagery and horribly clunky lyrics in English. But I think this is included in the process of taming a wild animal, so I went with that. ⤴

3. The written lyrics said 瞳 (hitomi), which technically means “pupil(s)” but usually gets translated to “eyes” outside of scientific settings because “pupils” just isn’t romantic or poetic in English. The sung lyric, 目 (me) means “eye(s),” and also gets used in romantic/poetic lyrics in Japanese. That said, while “Hitomi” is a very common name for girls, you will probably not find a girl named just “Me.” ⤴

4. I might be off on this. The written lyrics said 艶色, which is pronounced “enshoku” as a compound meaning “showy good looks” or “glossy shades (of color).” However, the sung lyric pronounced these characters as “adeiro.” The thing is, 艶 can be pronounced “ade,” but as far as the dictionaries tell me, it only gets pronounced that way in the word 艶やか (adeyaka) meaning “charming” or the compound 艶姿 (adesugata) meaning “charming figure [of a woman].” However, I found several references to “adeiro” online in things such as personal blogs, Twitters, and a makeup line, some of these spelling it out phonetically, others writing it as 艶色. The usage seems to be along that vein of glossy colors and charming women. Given the rest of the lines in this verse, “seduction” felt more appropriate than just “charm.” ⤴ 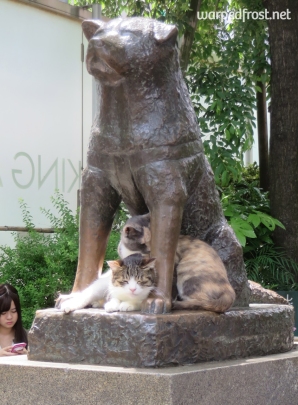