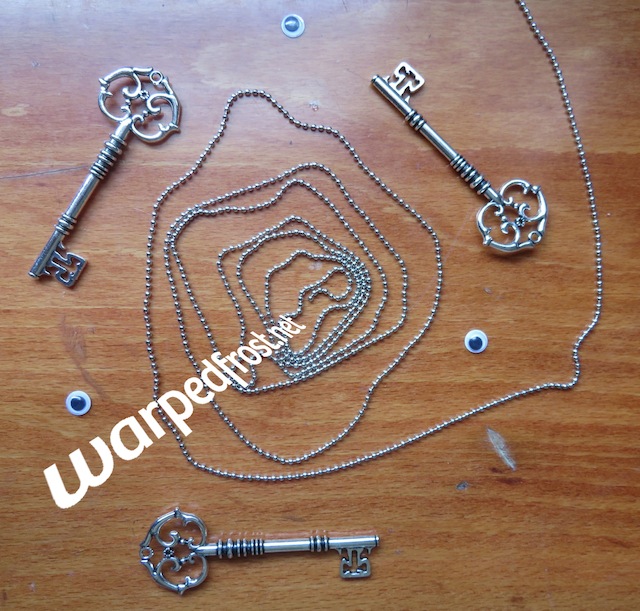 Perhaps the only thing I like more than art is making fun of art. It comes from a place of love. ♡

When I was looking for skeleton keys for a piece (which ended up in this exhibit </shameless plug>), I bought a pack of keys with two designs. One had a crown, and the other, although I didn’t realize it at the time of purchase, happened to be the exact same key featured prominently on the cover of the “Spiral Daisakusen” single, hence my little tribute to the left. The googly eyes had been used in another piece, so they were in my toolbox with the keys and ended up here because why not.

Jokes aside, while I initially had the same reaction to “Spiral Daisakusen” that many exist†trace fans probably had, I came to really like the song once I was listening to it in the context of the album rather than with the music video. That said, now I can watch even the video and not have a knee-jerk “OMG This isn’t the old exist†trace!” reaction. Now I can laugh at how ridiculously artsy-fartsy it is. Somebody went to art school!

Anyway, below the video embed are the lyrics and translation. The Japanese lyrics are taken from Rock Lyric as always, although there may be a mistake in theirs. Where the second フェイク appears, what’s actually sung is the opposite リアル; it’s possible it’s like that in the liner notes but as I don’t have those from my iTunes purchase of the album I went ahead and wrote what’s sung rather than what’s written on the site. As for miko’s explanatory blog posts, there are actually two which mention this song (this one from when the single was released, and this other one written after the album), so I went ahead and translated the relevant sections of both.

I’ve got one translation note and as I don’t feel like dealing with actual HTML right now I’ll just say it here: I’m not 100% sure who the subject is supposed to be in the lines about manipulating the spiral. Is it that the singer will manipulate the spiral of the person being spoken to, or is the singer telling the person to take control of the spiral already? The word 操る (ayatsuru) means “to control” or “to manipulate”, usually something or someone external to oneself. However, you can, for example, ayatsuru English, meaning you have a good command of the language. Given the other things in the lyrics, especially the switch from “fake” to “real,” I interpreted the first instance as “I’ll control the spiral” and the second and third instances as “You’ll control the spiral.” But given the daisakusen part (=maneuvers, military operations, strategies, etc.) I’m also inclined to interpret it as the singer controlling the spiral always. Like, she’s fighting with it, taking it on. Then again, that kimi nara part makes it sound like “If it’s you, you could do it,” so maybe the singer does want the person to take control, the same way she wants the person being spoken to to stop working too much.

Hmm, well, take it as you will, O Reader!

Whew, this has got to be the longest introduction to a song translation ever! So anyway, enjoy, and Happy Juneteenth and Happy Igu Day!

atto iu ma ni one day is over
sonna you are LAZY CRAZY CANDYMAN
kyou mo kinou mo too much working, sir
Oh! no shinda me wo shiteiru yo

The “good bye” was over in a flash
You’re a lazy, crazy ladybug like that
A red-eye shower again today, like yesterday
No, no, how long are you gonna drag this out?

Hey…is that sigh supposed to get my attention?
That doesn’t pique my interest at all

It’s love, it’s romance, so what?
Forget all that right now
If you can enjoy the fake tonight,
I’ll be able to control your spiral

One day is over in a flash
You’re a lazy, crazy candyman like that
Today, just like yesterday, too much working, sir!
Oh, no! Your eyes look dead, you know!

Hey…you think you can measure the future with that ruler?
Put that away, let’s do it up big!

Honor, money…so what?
Forget all that right now
Tonight, it’s just the two of us
In our secret melty dream spiral

This and that, the past and the present
It’s all yours
If you can enjoy what’s real tonight,
You’ll be able to take control, I know you can

Love, romance, honor…
Forget all that stuff right now
If you cast it all away, all of it,
You’ll be able to ride your spiral

Alright, on to the first track [of the single], the title track “Spiral Daisakusen”!

This time, the concept was to all out, for real, have some serious fun on this single! That’s why we tried out adding an 80s disco sound to this track, which at first had been a standard dance-rock number. My guitar part was cut a little, and we tried adding some fuzz and making everything sound noisy…we incorporated many things we had never done before, yet once we got down and actually did it, it all seemed to perfectly match the world of Igu! The guitar is a simple instrument, but it contains many, many unknown worlds within it. If a musical composition is calling, as a guitarist, I want to try and play anything and everything. That feeling grew more an more having written this song.

By the way, there are many behind-the-scenes secrets about the making of this song’s music video, but if I had to share just one, it would have to be, after all, the one about that wig. LOL

It was a bobbed style with the front part down low. I actually liked it quite a bit, but…as I moved around during filming, it would start sliding off, toward the back of my head. So there’s an occult phenomenon going on with my bangs changing length at different points in the video. Anyone who’s curious, how about watching the video closely? LOL

I had been expecting it, but there were, after all, many surprised reactions right after the “Spiral Daisakusen” single was released. I think this song evolved over the course of playing it live. To say nothing of the chorus in the intro! I think there are still some people who haven’t learned the whole thing yet, but when I saw people singing along with the members during the intro, it made me so, so happy! We should be playing it at our show on the 21st of this month, so everyone, please learn the song and come sing it with us!

With my guitar solo going straight into Omi’s guitar solo, this song is filled with the deliciousness of our twin guitars, so I want everyone to listen to this song again with fresh ears, and pay special attention to the musicians’ performance! Also, this song has been re-mixed from the ground up. Now that “Spiral Daisakusen” has leveled up thanks to its inclusion on the album, let’s sing it and dance together!

One thought on “exist†trace — Spiral Daisakusen” 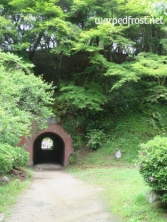 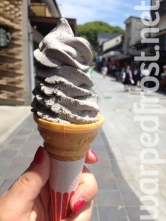 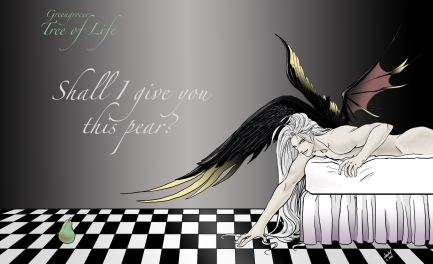 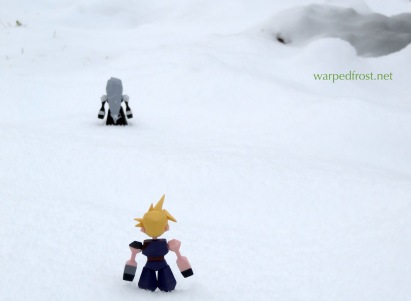 The Reclining Buddha at Nanzōin, which is the first stop in the 88 temple pilgrimage of Sasaguri & Shikoku. This is the largest bronze reclining Buddha in the world (August 2010)
Join 62 other subscribers