One time for my 30th birthday my friends and I stepped out from dinner at the Fukuoka Hard Rock Café, which back then was across from Yahoo! Dome and next to Zepp Fukuoka and Hawks Town Mall, and saw a balloon artist with a sign that said he could make anything. A friend suggested I get a Sephiroth.

On the one had, the thought of being an Old Person walking around a major city with a balloon animal felt absurd. On the other hand, my friends had just conspired to have them sing “Happy Birthday” to me at the Hard Rock, surprise cake with custom message and sparkler candle and all. 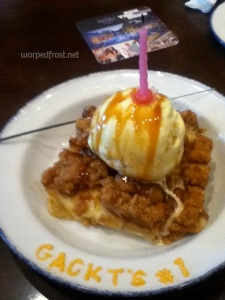 Might as well keep making an ass of myself!

So we approached the balloon artist and I asked if he could make Sephiroth from Final Fantasy VII. He said he wasn’t too familiar with the character, but if I had any reference for him to look at he could do it. I had a Kingdom Hearts Seph strap on my phone, and the FFVII Compilation Wallpaper app on my iPod. He studied these for a few minutes and got to work, occasionally checking the references again. Balloon Sephiroth was thus twisted and breathed into existence in about 10 to 15 minutes.

Birth of a God

By this point we had attracted a small crowd of onlookers. The balloon artist asked if he could take a photo for himself, as he had never made Sephiroth before. I said of course he could. After doing so, he asked if this character could fly. I said yes. So he made a couple of additions before handing Balloon Seph back.

Side note 1: I don’t know if it’s quite necessary to cover the faces of the people in this photo since we were outside in public, but…guess I’m old fashioned; it feels weird to post people’s faces publicly without their explicit permission. (Though I kinda didn’t want to cover the face of the person to the left of Sephiroth’s wing because their expression was like (°o° ) and I thought that was awesome.) Masks were fairly common in Japan by then but the current situation did give me the idea to cover their faces this particular way.

Side note 2: There is one spoiler from the original FFVII at the very end, so just skip the last bit after the drawing at the bottom if you haven’t played it already. There are no spoilers for Remake.

And so, Balloon Sephiroth in our midst, we set out for our next destination, going through the mall to get to the nearest mass transit stop.

The Avengers was still in theaters in Japan at this time. I find it funny now that Seph is right “after” where the Japanese tag line says “Can they save the world, or…” How ominous!

We proceeded further into the mall, going through an arcade/amusement center. (Is that what they’re called? I don’t remember…)

The Chase of Highway 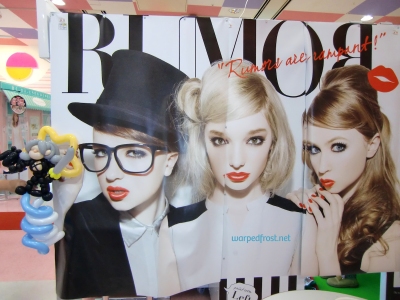 It occurs to me seeing this that there absolutely needs to be a photo booth in the Gold Saucer in the Remake, whenever it is that we get to that part. It would work with the screenshot feature. And if you do something special maybe you can unlock Sephiroth, Angeal, Genesis, and Zack to have them take pictures in the booth and doodle on the “photos.”
☆♡(≧ ∇ ≦)♡☆ 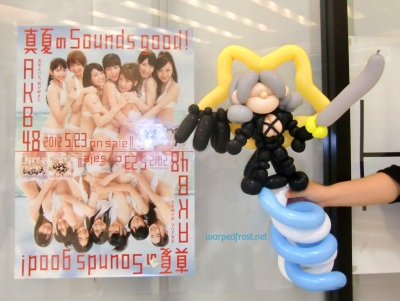 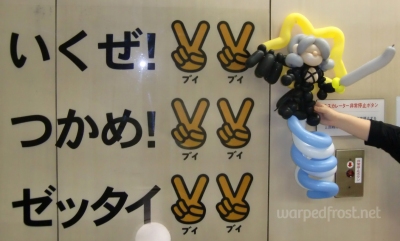 Fukuoka’s baseball team, the Softbank Hawks, must’ve been in the running for the Japan Series around this time, as this poster says “Let’s go! Get it! ABSOLUTELY! Victory (x6)” (to translate hastily and ungracefully). The team’s song begins with the lyrics “Train your wings to be strong / in the salty wind of the Genkai Sea,” which seemed a bit fitting for Seph. 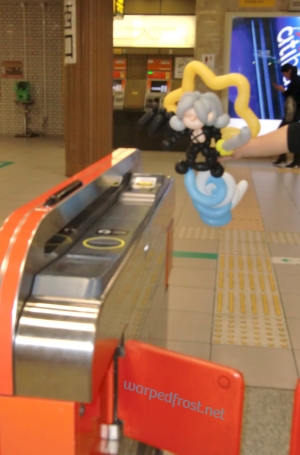 Paying the Fare (with an invisible Nimoca)

It was a bit difficult to get this shot. The stationmaster started giving us dirty looks and we shuffled away (giggling) before he said anything.

I don’t know if this makes things better or worse, but I must mention that we were all sober for the entirety of these escapades. Well, at least I was, as I don’t generally drink, but I suppose I don’t remember what all everyone ordered with dinner. 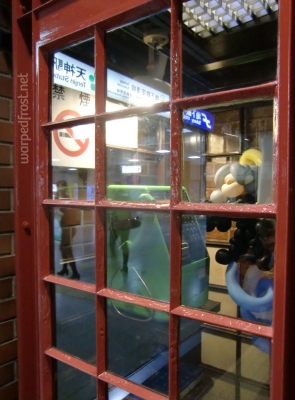 One of my favorite moments in Crisis Core was when Seph had to jerk his phone away from his ear because Zack was yelling on the other end. It was just such a human thing to do. I loved all the pre-breakdown Seph we got to see in CC. T^T

Side note 3: I just finished reading the fanfic The Fifth Act for the first time so I’m still a bit in my feelings about all the SOLDIER boys…

Shall I give you this pear and lemongrass biodegradable body wash?

Getting some gil from the ATM

Finally, we went back above ground in Tenjin… 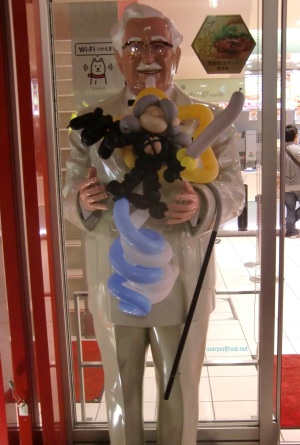 Kalm Fried… No, I can’t say it

…and soon after reached our Promised Land, Big Echo Karaoke. We got our room and took the elevator up.

We didn’t take the stairs

Before we got to our floor, the elevator doors opened to a pair of Japanese customers. Without thinking one looked at us and said 「おっ、ハロウィンみたい！」(“Oh, it’s like Halloween!”) We all laughed, at which point the customers realized we’d understood them and apologized sheepishly. We waved it away and one friend apologized for not having candy to give. LOL

After singing lots of GACKT and other things, our time was up and we decided to call it a night. But we would be passing by one place in Fukuoka Tenjin Station that I absolutely had to get a photo at. 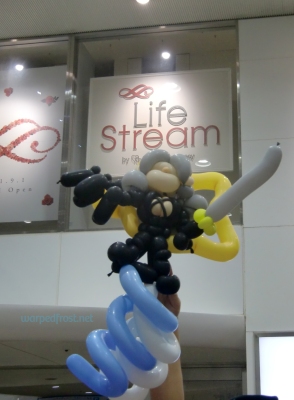 This pharmacy had done a little bit of rebranding the previous year and remodeled its store. I wonder why they chose this name?

While we were getting this shot, a young man nearby said to his friends, 「セフィロスやん」(“That’s Sephiroth, ain’t it?”) and our two groups laughed. I was glad that at least one more person had for sure recognized and enjoyed Balloon Seph.

At this station my friends and I headed to our respective train lines to head home. When I got to my apartment, I added Balloon Seph to my little Seph collection. I had brought my Play Arts Seph figure with me to Japan, but the others I bought while I was there.

Balloon Seph lasted at least two months. I had updated my Facebook album at that point but apparently didn’t note when I finally had to let Balloon Seph return to the Lifestream through assisted deflation. Whatever the case may be, he was a nice bit of silliness while he lasted.

Side note 4: This was years ago but I never got around to posting about it on my blogs, mainly because dealing with this many photos is so time consuming. Now, with the Remake, I figured it would be a fitting time to share with the wider world.

Today is July 23rd, which is My Chemical Romance Day. Enjoy this silly Sephiroth/MCR mash-up, which I had previously posted to the Fanart section of this blog, and originally posted on North American Square-Enix Members.

The result of a deep, philosophical debate about what musical instrument Sephiroth would play. Of course, I said “sousaphone,” and it just happened to be My Chemical Romance Day. (July 23, 2012)

♪ When I was a fetus
My father injected me with Mako
So I’d be really strong
He said, “Son, when you grow up would you be the Savior of the whole world,
the beaten and the damned?”
He said, “Will you defeat them, that Cloud Strife, and all his weird little friends, the plans that they have made?”
“Because one day, I’ll leave you, a consciousness, deep inside a computer, to join the Reunion.” ♪

6 thoughts on “Sephiroth’s Journey Through Fukuoka” 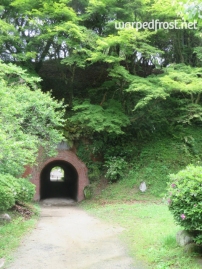 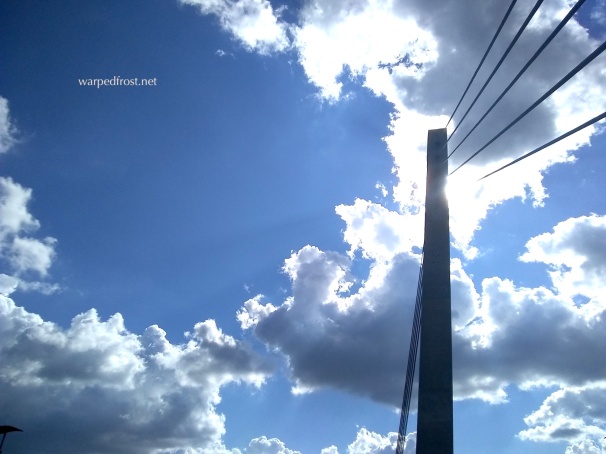